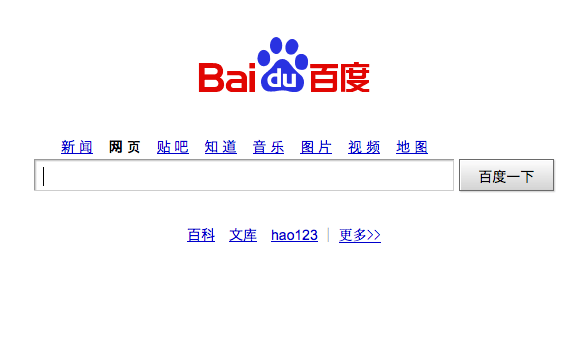 Baidu is that search engine which doesn’t appear in your search engine because it has a universe of its own searches and couldn’t be bothered by the rest of the world. We’re talking about China. To keep things real, Mainland China doesn’t use Google, Whatsapp, Facebook, Twitter, Instagram, Pinterest or Youtube but it does have equivalents that are distinguished but similar to its western counterparts. In China, Baidu replaces Google, WeChat replaces Facebook & Whatsapp combined, Weibo replaces Twitter, Instagram & the newest social media kid on the block – Xiahongshu aka Little Red Book replaces Pinterest.

Let these 10 facts about Baidu, change your assumptions about search engines because Baidu is unique with the way it operates.

Back in 1994, Robin Li was working for the Down Jones and Company and followed his instincts only to satisfy his curiosity about algorithms for search engines. He developed RankDex in 1996, an algorithm that ranked web pages. He worked with Infoseek for a few years after which he moved to China in 1999 to launch Baidu. Yes, the internet was introduced to China after the west and that made it exciting for the country, opening a window of new possibilities. Baidu initially began as a paid search service for major corporations. After a year, Robin decided to scrap the idea and launched Baidu as an independent service.

2. The Largest Search Engine In China

The first one to lead the flock tends to be the most successful one and also one of the biggest shareholders. Baidu began its journey in the year 2000 and now accounts for over 70% of the search engine market share in China. Its competitors like Sougou and Shenma cover as little as 8.8% of the China search engine market share. Over 90% of China uses Baidu as a search engine. The Chinese search engine has and operates almost every Google alternative such as Adwords, Translate, Maps and a host of other related segments.

3. Baidu and Its Silicon Valley Funding

Robin Li and Eric Xu founded Baidu in the early 2000s and managed to raise $1.2 million in the seed funding round from Integrity Partners and Peninsula Capital – both Silicon Valley venture capital firms. In September, the company had grown big enough to secure another round of funding from a pair of venture capital firms, Draper Fisher Jurvetson and IDG Technology Venture that invested $10 million in Baidu.

If you’re under the impression that Baidu’s Ad buying process is the same as Google, you might as well stick to Google because Baidu functions differently. It may take you a few months to establish yourself as a business online in the Chinese world as it involves the provision of documents such as a business license, other Id Proofs to the search engine company. You will also have to be fluent in Chinese, because the entire application process is in their language obviously and you have to just fit in.

The good news is that Baidu makes its profits with ads. Chinese internet users were transfixed on a mix of sports events, natural disasters, politics and entertainment in 2018, a pattern that also prevails on Google’s search listing. The Chinese do a lot of product research online before buying household items, electronics, fashion, beauty and health products which is where Baidu capitalizes its share of ad revenue.

According to another report, the ten most popular keywords used on Baidu are the following: qzone, Da Zhu Zai, Baidu, Double Chromsphere, Zhe Tian, Mang Huang Ji, The Tang Door, Wu Dong Qian Kun, Taobao, and weather. These words may come in handy if you’re trying to get your material or your company higher up on SEO.

7. Its More Than Just A Search Engine Baidu is more than just an ordinary search engine. In fact, the company offers close to sixty community and search services ranging from Qunar, a travel booking service, to Baidu Yi, a smartphone operating system. In addition, services also include an eCommerce platform, games, patent searches, a social network, government information search, and an encyclopaedia. Baidu also owns a small number of shares in Didi Chuxing, which is now China’s answer to Uber. Like Google, Baidu also believes that a natural extension of its data-mining ecosystem would be autonomous electric cars or driverless cars. Baidu began testing out driverless cars in 2015 on public roads, forming a tech research centre last April in Silicon Valley. The cars are powered by a combination of its own AI algorithms, HERE Maps, and NVIDIA’s automotive chips. The company is presently outsourcing production of these driverless cars to automakers in China.

In addition, Baidu also has smart bikes in their arsenal, called DuBike. The bicycle comes equipped with a wide variety of motion and health sensors, syncing to a mobile application. Furthermore, it features onboard navigation signals, allowing the rider to follow directions without having to constantly look down at their phones/tablets. It also lets riders share their route with others. What’s even more surprising, is that the entire system is powered by the rider’s very own kinetic energy, which doesn’t require any recharging.

MIP(Mobile Instant Pages) is a set of open technical standards applied to Baidu’s mobile web pages. Through MIP, the content of the page will reach the user instantaneously in a more friendly way without waiting to load. Baidu hit a milestone of 500 million monthly active users after which it decided to introduce an app version. The app saw 151 million daily active users as of September 2018 and the search engine company stated that its net profit for the third quarter last year, jumped by 56 percent and recorded continued growth in revenue and traffic to its mobile app.

Baidu SEO isn’t as easy as Google SEO. Baidu uses some of its own sites to be placed in the top of search results, culminating in around twenty percent of Baidu traffic being redirected to one of the company’s subsidiary sites, such as Baidu Zhidao, Baidy Baike, or Baidu News. This results in a challenge for brands to obtain top ranking in terms of SEO. On Baidu, brands will need a large number of keywords and backlinks in order to have a strong SEO presence.

Want To Know How To Grow Your Business On Baidu?