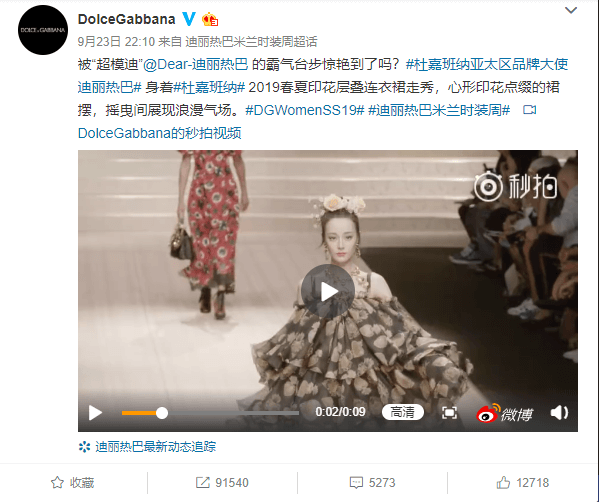 The Italian fashion brand has uncovered a major social media engagement secret in the Chinese universe and hit the nail on the right spot with their recent move. They replaced old boring models with a Chinese celebrity Dilraba Dilmurat and Chinese stylist Han Huohuo at their Milan fashion show catwalk on September 23rd.

This move certainly broke the internet in other parts of the world and activated the fashion community on Weibo in favour of the move. The videos received 10,000+ likes and 91,540 shares. The series of posts garnered a total of 506,000 page views while the hashtag #DGWomenSS19 made it to Weibo’s top trending hashtags.

The brand has had a major digital awakening once again for the right reasons this time, ever since they received negative backlash for their campaign back in 2017 that supposedly featured a very stereotypical China. How Did Dolce & Gabbana Plan This Move?

We’ve already specified certain aspects of Chinese digital marketing and the importance of KOLs in our previous blog. What made this move successful was a basic understanding about the KOLs culture that the Italian brand seemed to have mastered. The Chinese rely on information from credible sources that exude a certain prototype. You need to win the KOLs with your products as a brand for the information to spread across your specified audiences.

How Dolce & Gabbana played its cards

The Dolce and Gabbana Weibo account began their series of posts with behind the scene videos and pictures of Dilraba Dilmurat with the D&G team, followed by her videos on the runway. The videos received high engagement from KOLs and other designers in the fashion community in China. More than 80 per cent of Chinese luxury shoppers are on social media, according to a recent report. They are also using networks on their favourite platforms to research products and brands before they buy.

Michael Kors became the first luxury brand to work with Douyin last November, and since then, brands such as Dior and Tommy Hilfiger have followed suit. Its huge user base has also attracted numerous A-list celebrities and KOLs, including actress Angelababy and singer Kris Wu. Even e-commerce companies, including the luxury e-tailer Secoo, have a presence on the platform. Luxury brands have won the hearts of their Chinese customers by localizing their content to reach out to the local audience in China. The Chinese respect entities that understand and reciprocate in their native language i.e. Mandarin, spoken in Mainland China, despite the firewall situation.