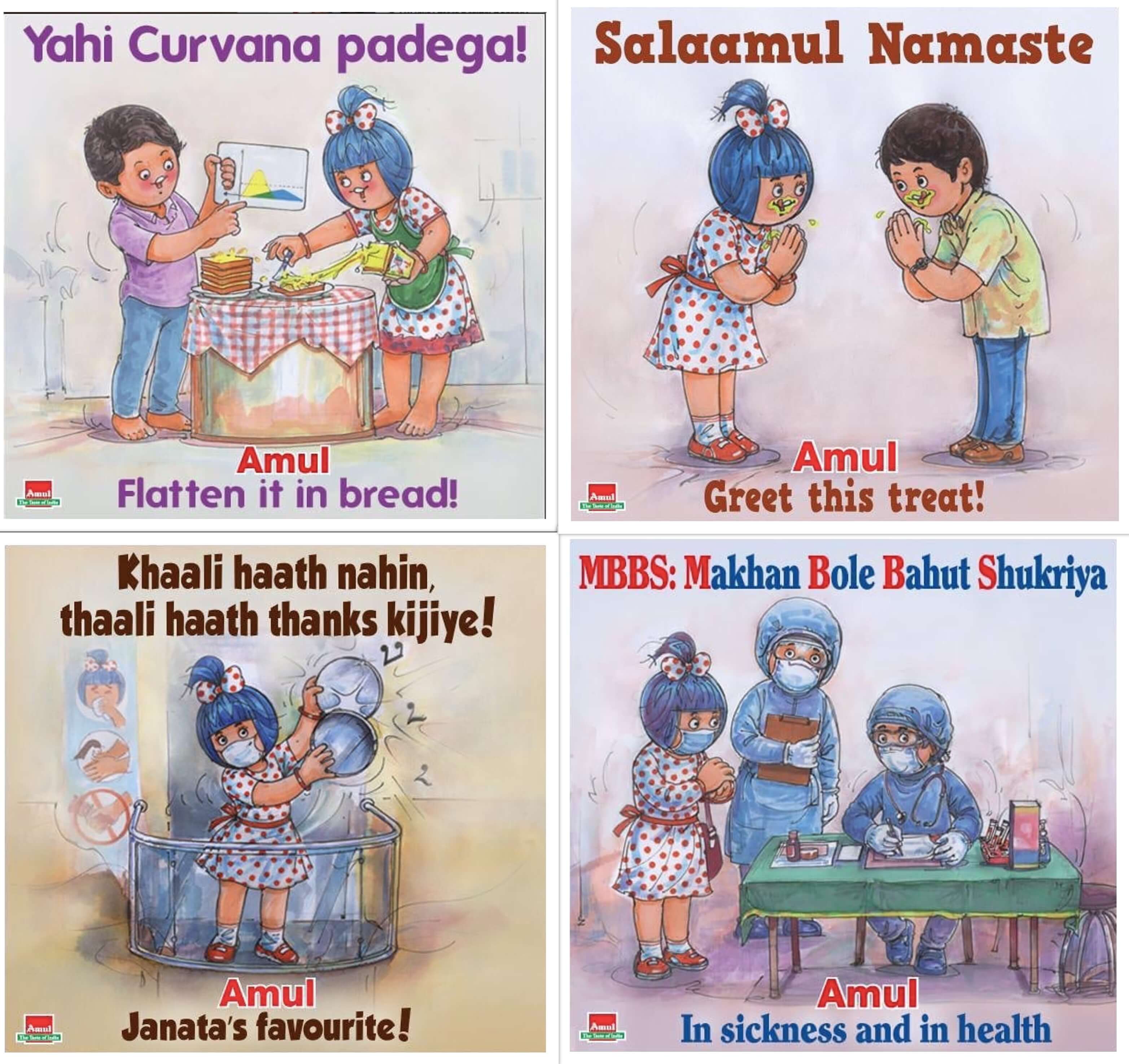 Localizing marketing campaigns leads to brand awareness that is relevant and meaningful. It helps in increasing brand value and expanding the reach twofold thus creating a lasting impression that connects with your prospects and consumers.

A few Indian brands came up with funny ways to spread the awareness of social distancing amid Covid-19 by localizing their campaigns. A lot of brands sent out the message using creative Hinglish campaigns by taking references from blockbuster Bollywood movies and trending terminologies to have an effect on their audience.

Here are top 7 Hinglish campaigns that engaged people during Covid-19: Amul is India’s fastest-growing dairy organization and the 9th largest in the world. The brand is well known for its brand campaigns that are topical and localized, especially using Hinglish to reach out to the consumers.

To promote social distancing, their cartoon comics were relevant, witty and creative thus speaking about ‘flattening the curve’, ‘following the practice of Namaste’, glorifying ‘the applaud observed across the entire country’ and ‘thanking the doctors’ by taking a reference from a 2003 Bollywood blockbuster movie Munnabhai MBBS, starring lead actors such as Sanjay Dutt, who is a sensation amongst the young men of India. Munnabhai MBBS is one of the top choices under the comedy movies of Bollywood and its dialogues are favourite amongst the youth and are often used in memes.

Amul did a brilliant job in adding its reference while designing their creatives. During COVID-19, Goibibo kept promoting their services such as booking trains and flights, promoting their special attributes such as user rated destinations and focusing on ‘special offers’ for bus bookings on their Instagram page, although there is an ongoing countrywide lockdown. While promoting their services, they also creatively pushed the ‘stay at home’ notion by adding the rooms of a house with Indian suffixes such as Pradesh, Nagar, Pur, Garh etc. which translate to ‘place’ in Hindi.

Due to the lockdown, travelling is banned in India, so the only places people can travel to are the rooms of the house. Goibibo cleverly used this context in designing creatives for their Instagram. Harvest Gold is India’s leading bread producing company. Their Hinglish tagline ‘Ek Desh, Ek Subah, Ek Sabki Bread’ (One Country, One Morning, One Common Bread) is an example of embracing localization in marketing. Not just in tagline, but throughout their brand communication, they have used local languages such as Hindi and Hinglish.

During COVID-19, Harvest Gold used a mix of creatives on their Instagram handle to promote social distancing with the campaign name ‘Dooriyan Hain Zaroori’ (again using Hindi, literally translating to ‘Distances are Necessary’). They initially published a series of toasted bread with text promoting social distancing and the campaign hashtag.

Their second part of this campaign included creatives referring to a 1975 Bollywood classic Sholay, which became the highest-grossing Bollywood film in that year and the first film in India to celebrate a silver jubilee at more than 100 theatres. With India’s leading stars from that era such as Amitabh Bachchan, Dharmendra, Hema Malini, and Jaya Bhaduri, Sholay still is a classic movie with unforgettable dialogues, which are used in the campaign creatives to resonate with the audience.

Excel Entertainment, an Indian film production and distribution company, is known for its blockbuster hits and coming-of-age movies such as Dil Chahta Hai, Lakshya and Zindagi Na Milegi Dobara.

They used one of the posters from its own production, Gully Boy (2019), a multi-award-winning film that grossed over $37 million globally. A sensation amongst the youth of the country and a game-changer for the street rappers of India, picking Gully Boy to spread awareness during the pandemic was a wise choice.

In this original Gully Boy poster, the actors sit next to each other, but the brand added a gap in between them to promote social distancing amid COVID-19. Zee Entertainment, is a part of the Essel Group, a multi-billion-dollar business conglomerate, having diverse business presence across Media, Entertainment, Real Estate etc. They have more than 28 television channels across the globe.

The brand on their Zee Corporate Instagram account, promoted social distancing by taking references from the multi-award-winning movie Gully Boy (2019). The message on their creative asked people to not be a ‘Gully Boy’, where ‘gully’ means narrow lanes of a city. The message asked people to not roam around on the lanes and stay at home while promoting their campaign hashtag ‘Hum Andar Corona Bahar’ (We in, Corona Out).

They took reference from another movie, Secret Superstar (2017) starring Aamir Khan, one of Bollywood’s top stars, to promote staying at home while nurturing your skills. It asked people to stay at home and ‘bring out the star in you’.

This message was especially relatable due to the amount of free time one got during the lockdown phase and how people shared videos and pictures of themselves singing, baking, dancing etc. Vadilal Ice Creams is India’s second-largest ice cream brand with significant exports to USA, UK, Australia etc. It has a distribution network of 50,000 retailers, 550 distributors and 250 vehicles for delivery of goods.

Vadilal reached out through their Instagram to promote social distancing by staying topical and taking cues from Ramayana, one of the two major Sanskrit epics of ancient India. A 1987-launched Indian tv series Ramayana, which was a visual representation of this ancient script was re-aired on television during the COVID-19 lockdown.

To stay relevant and connect with their consumers, Vadilal cleverly promoted social distancing mentioning ‘Lakshman Rekha’, an anecdote from the epic. Lakshman Rekha forms a strong connotation amongst Indians and is widely used in conversation to ‘not cross the line’.

Lakshman Rekha, contextually, is a line drawn by Lakshmana, an avatar of Hindu God Vishnu, around the hut he shares with his elder brother Lord Rama and Rama’s wife Sita during their exile. Before going out to search Lord Rama, Lakshman draws a line around their house to protect Sita as he asks her to not cross that line, known as the ‘Lakshman Rekha’. Unacademy is India’s largest online learning platform. In half a year, they have educated over 300,000 students from their 2,400 plus online lessons and specialized courses.

The brand promoted social distancing through their Instagram page. Although an educational platform, they used Hinglish to spread out the message of social distancing instead of using English. Under their regular Student Dictionary series, they put forth ‘Social Distancing’ as the ‘need of the hour’ and ‘the need to avoid social interactions’ just like how students do during exam preparations or ‘Exams ki tayyari’.

At Digital Crew, we believe in a Globalized World with localized messaging that resonates more and hence we help brands launch in India with Hinglish campaigns supported by English and Hindi websites.

To create funny, engaging and localized Hinglish campaigns, talk to us today and we will connect you with over a billion Indians who will fall in love with your products and services.